Breed standards are created by various parent breed clubs and then accepted officially by international bodies (American Kennel Club and Federation Cynologique) that govern purebred dog matters. Standards describe the ideal expression of the breed and include a breed's purpose, appearance, temperament and structure. Standards define qualities that set one breed apart from every other breed.

The latest version of the Berner standard was approved by the AKC 2/10/90. 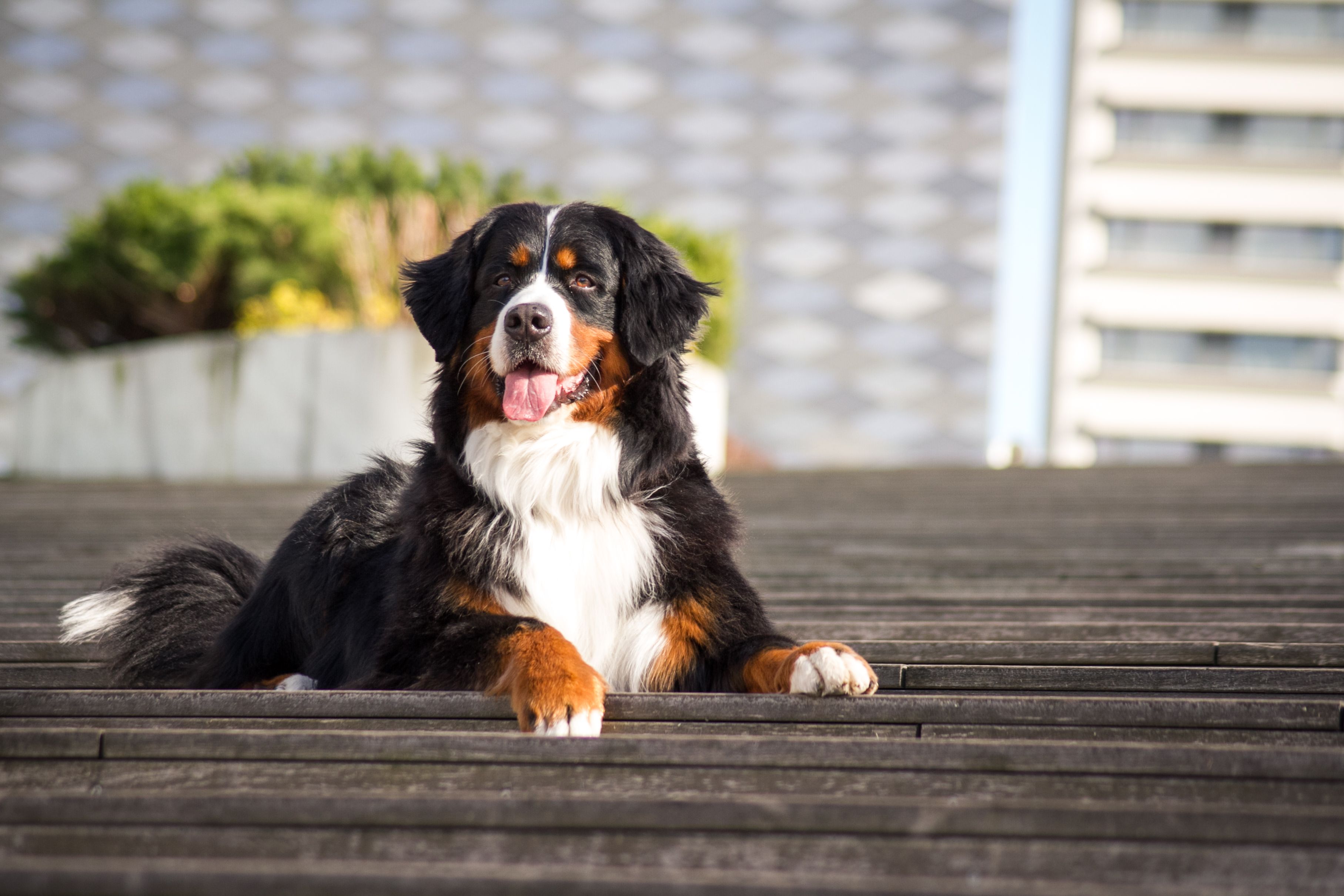 The Bernese Mountain Dog is a striking tri-colored large dog. He is sturdy and balanced. He is intelligent, strong and agile enough to do the draft and droving work for which he was used in the mountainous regions of his origin. Dogs appear masculine, while bitches are distinctly feminine.

Measured at the withers dogs are 25 to 27-1/2 inches, bitches are 23 to 26 inches. Though appearing square, Bernese Mountain Dogs are slightly longer in body than they are tall. Sturdy bone is of great importance. The body is full.

Expression is intelligent, animated, and gentle. The eyes are dark brown and slightly oval in shape with close fitting eyelids. Inverted or everted eyelids are serious faults. Blue eye color is a disqualification. The ears are medium sized, set high, triangular in shape, gently rounded at the tip, and hang close to the head when in repose. When the Bernese Mountain Dog is alert, the ears are brought forward and raised at the base, the top of the ear is level with the top of the skull. The skull is flat on top and broad, with a slight furrow and a well-defined but not exaggerated stop. The muzzle is strong and straight. The nose is always black. The lips are clean and as the Bernese Mountain Dog is a dry-mouthed breed the flews are only slightly developed. The teeth meet in a scissors bite. An overshot or undershot bite is a serious fault. Dentition is complete.

The neck is strong, muscular and of medium length. The topline is level from the withers to the croup. The chest is deep and capacious with well-sprung but not barrel shaped ribs and brisket reaching at least to the elbows. The back is broad and firm. The loin is strong. The croup is broad and smoothly rounded to the tail insertion. The tail is bushy. It should be carried low when in repose. An upward swirl is permissible when the dog is alert but the tail may never curl or be carried over the back. The bones in the tail should feel straight and should reach to the hock joint or below. A kink in the tail is a fault

The shoulders are moderately laid back, flat-lying, well muscled and never loose. The legs are straight and strong and the elbows are well under the shoulder when the dog is standing. The pasterns slope very slightly but are never weak. Dew claws may be removed. The feet are round and compact with well-arched toes.

The thighs are broad, strong and muscular. The stifles are moderately bent and taper smoothly into the hocks. The hocks are well let down and straight as viewed from the rear. Dew claws should be removed. feet are compact and turned neither in nor out.

The coat is thick, moderately long and slightly wavy or straight. It has a bright natural sheen. Extremely curly or extremely dull-looking coats are undesirable. The Bernese Mountain Dog is shown in natural coat and undue trimming is to be discouraged.

The Bernese Mountain Dog is tricolored. The ground color is jet black. The markings are rich rust and clear white. Symmetry of markings is desired. Rust appears over each eye, on the cheeks reaching to at least the comer of the mouth, on each side of the chest, on all four legs, and under the tail. There is a white blaze and muzzle band. A white marking on the chest typically forms an inverted cross. The tip of the tail is white. White on the feet is desired but must not extend higher than the pasterns. Markings other than described are to be faulted in direct relationship to the extent of the deviation. White legs or a white color are serious faults. Any ground color other than black is a disqualification.

The natural working gait of the Bernese Mountain Dog is a slow trot. However in keeping with his use in draft and droving work, he is capable of speed and agility. There is good reach in front. Powerful drive from the rear is transmitted through a level back. There is no wasted action. Front and rear legs on each side follow through in the same plane. At increased speed, legs tend to converge toward the centerline.

The temperament is self-confident, alert and good natured, never sharp or shy. The Bernese Mountain Dog should stand steady, though may remain aloof to the attentions of strangers.

Disqualifications blue eye color; any ground color other than black.

What about those doggone carts? To learn more about carting and Draft competitions, contact our Draft Committee.

Want to learn more about the breed? Join in the fun! Become a member of the Bernese Mountain Dog Club of Oregon.